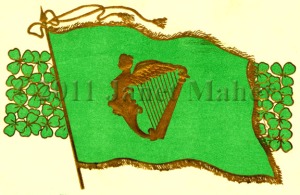 All great nations with ancient histories in the world had strong oral traditions that kept the culture’s memory alive through poetry and song. In Ireland, the only country whose national symbol is a musical instrument, history is still contained in its musical traditions. Traveling storytellers, the seanachais/shanachies, carried Irish history throughout the landscape, one household hearth at a time. When written language emerged, it was an ecclesiastical skill, and the history of Ireland (and the world) was preserved in the monasteries in exquisite hand-scribed and illustrated handmade books. For many centuries the clergy were the only literate people, having studied abroad for the priesthood. When education was forbidden for Catholics, children were taught secretly in open fields, thus learning to speak, read and write Irish in tandem with learning the history of their country. The arrival of Ireland’s first populations is steeped in mysticism and lore, as much a part of the poetic tradition as the sacred spirit of the place.

Archeologists have determined that during the Middle Stone Age, the Mesolithic period sometime around 9,000-7500 B.C., individuals and small groups began to venture into Ireland, walking over the naturally formed ice bridge between Europe and the northern area that became Scotland. (Eamonn P. Kelly, writing about prehistoric antiquities  for the National Museum of Ireland in 2002 placed the date as about 7000 B.C.) When the ice melted around 6,000 B.C, Ireland became separated from the rest of Europe by the Irish Sea, which was enough of a barrier to protect the island from Roman and other nation’s conquests for many centuries. Ireland was full of forests, minerals and ore deposits, and by about 3,500 B.C. farming settlers had introduced agriculture. The early inhabitants constructed the ceremonial stone circles, monumental stone dolman portal tomb structures and the passage graves of Dowth, Knowth, and Newgrange, which date to about 3000 B.C.  The Hill of Tara, in County Meath, was anciently important to all the clans in Ireland, and its “enclosure of the kings” (Rath na Ri) has been determined to date to about 94 or 95 B.C. (McCaffrey, Carmel and Eaton, Leo, In Search of Ancient Ireland, The Origins of the Irish from Neolithic Times to the Coming of the English, Chicago, IL: New Amsterdam Books, 2002, pg. 62.) (See images of stone circles and other archealogical sites at Paola Arosio and Diego Meozzi’s web site.)

Dugout canoes, simple boats made of branches covered with stretched animal hides (coracles) and similarly made rowboats that could travel greater distances (currachs), were used from the first century into the twentieth century, particularly on the west coast near the Blasket Islands, which is still fairly remote and where Irish is still spoken. Legend has it that Saint Brendan sailed in A.D. 500 in a currach all the way to the continent that eventually became America.

Exquisite bronze, gold and iron works, examples of which are held in the major museums of Ireland and England, were made surprisingly early. Ornate brooches held capes in place, jewelry (arm bands, collars, earrings, clothing fasteners), decorative weapons and cauldrons, elaborately illustrated monastic texts (Book of Dimma, Book of Kells), handheld bells, missals and jewel encrusted box shrines that contained them were discovered at various times throughout the nineteenth century. An ancient book, the Fadden More Psalter, found preserved in a bog in Tipperary in 2006, is now on display in the National Museum of Ireland.

The collection of antiquities there is stunning, testifying to the extremely high level of Irish craftsmanship that existed even in Neolithic times (3600 – 2800 B.C.) Very thin sheets of gold were fashioned into ornamental round and crescent-shaped discs embossed with geometric patterns, likely worn over clothing as collars signifying rank and status during the Early Bronze Age (c. 2200-1800 B.C.). By the Middle Bronze Age goldsmiths could twist long thin bars into delicate spiral necklaces. In the first century B.C. craftsmen could already work with glass. Delicate as a pod and about the size of a half mango, a small golden boat sculpture (likely representing a currach) is among the treasures attributed to the first century B.C.  Several tiny oars extend from each side, a crossed mast points upward and eight seats span its width. The Museum holds several ornamental shrines and brooches, including the Tipperary and Roscrea Brooches, the Killamery Brooch (Kilkenny) and the magnificent Shrine of Saint Patrick’s Bell (1100 A.D.). The Clonmacnoise Crozier is there (11th century) and the Ardagh and Derrynaflan Chalices (8th and 9th centuries, respectively).

Irish artwork of early Medieval times was associated predominantly with the largest group of warrior settlers from Central Europe – the Celts. The term Celt, originates from the Greek term, Keltoi, which referred to those who lived north of Greece. The Romans, whom the Celts conquered in the 4th century, called these people Galli (Gauls). The Gaels (Gaeils, Gaills) were firmly in place in Ireland by 400 AD. The Irish language (Gaelic), which was in existence by 150 A.D., is a mixture of pre-Celtic and Celtic forms of speech. Edward T. O’Donnell explained the different dialects: Brythonic Celtic (P-Celtic) came from Britain and Gaul, which became the languages Welsh and Breton (and the extinct Pictish and Cumbrian languages); Goidelic Celtic (Q-Celtic) was the dialect of those who settled in Ireland and Iberia and became Irish Gaelic, Scottish Gaelic, and Manx Gaelic.  (O’Donnell, Edward T., 1001 Things Everyone Should Know About Irish American History, New York: Gramercy Books, 2002, pg 6.)

Ireland was divided into the provinces of Munster (Southwest), Leinster (Southeast/East), Connaught (West), Ulster (North) and centralized Meath/Mide, which later became part of Leinster. The areas now contain several counties each, and particular surnames are still associated with them.

The original Irish, rural and tribal, functioned amid complex layers of leadership. Families shared and worked their lands communally using natural fluid land formations as designated perimeters of their properties, which extended great distances. Each of the major Gaelic tribes had their own King, under which were Ruling Lords who oversaw a number of Noble Chieftain families, who in turn had their own subjects. Extended family groups were called tuathas (i.e “people/community”) .

The ruling families employed historians, genealogists, musicians and poets, which comprised Bardic (literary) family groups.  Some families managed ecclesiastical properties (Erenach families); some were physicians and surgeons. Poets (fili) and Druids were among the highest classes and, with their great skills in memorization they held all the oral knowledge of history and science of the time. Brehons (lawyers) settled disputes by mediating laws that were born of Irish wisdom from commonly accepted practices, and the rights of women were considered equally with men. Women continue to be leaders overtly or behind the scenes in Ireland, and they feature among the great heroic tales, particularly of Cúchulainn, Fionn Mac Cumaill, and the Red Branch Warriors. (See Malachy McCourt’s History of Ireland for a seanachai’s style telling of these – Philadelphia and London: Running Press, 2004, pp. 13-26)

Although the various kings and chieftains in the tuathas continually vied for power and property, the Brehon Laws covered non-religious conflicts within the separate petty kingdoms. Every person had an “honor price” based upon their importance in society, and punishments were decided according to the honor prices of both sides in a dispute.

Myths explain the origins of Ireland’s people, which, like any ancient stories that have survived to this day, may have germs of fact involved. The Tuatha de Danann, the Firbolgs, and the Formorians were said to have formed the first races of Ireland. The O’Meaghers descended from the original Gaels, originating with Mileadh/Milesius of Spain, from at least 1700 B.C. or earlier. His three sons, Heremon, Heber, and Ir, were credited with beginning the ancestries of the 150 or so major noble Gaelic families in Ireland. Legend tells that Mil’s sons conquered the earliest inhabitants of Ireland. (See Google Books: A short history of the Irish people from the earliest times to 1920, Mary Teresa Hayden, George Aloysius Moonan. See also Pat Traynor’s transcriptions, Milesian Genealogies from the Annals of the Four Masters.)

The Cinel (descendents) Meachair trace their earliest lineage from Fionnchada, son of Connla, son of Cian, who was killed in the Battle of Samhair in A.D. 241. (O’Meagher, Joseph Casimir, Some Historical Notices of the O’Meaghers of Ikerrin, Library of Congress, Washington, D.C., American Edition: NY, 1890, pg. 13.) Cian was the second son of King Oillioll Olum, King of the Provence of Munster in the 3rd Century and Munster’s first absolute King. (Shaw, Antony, compiled by, Portable Ireland, A Visual Reference to All Things Irish, Philadelphia, PA: Running Press, 2002) Oillioll Olum died in A.D. 234. His father was Eoghan Taighlech, also called Owen the Splendid and Magh Nuadhat. Taighlech descended from Milesian’s son, Heber. O’Meagher noted that Eoghan Mor was called Mogh-Nuadadh and was killed by Conn of the 100 Battles. (pg. 199) (For more about Oillioll Olum see Google Books: The History of Ireland, From the Earliest Account of Time To the Invasion of the English Under King Henry II, T. Comerford, Esq., Baltimore: James Scanlon and B. Edes Publishers, 1826.)

According to Kane’s Ancestral Map of Ireland (Kane Strategic Marketing, Inc., P.O. Box 781, Harbor Springs, Michigan, 49740; Limerick, Ireland, 1993), some ancient Mahers were also descendents of Cormac Mac Art and Conaire Mor, both descendents of Heremon. Cormac Mac Art was the son of King Art Eanfhear, Monarch of Ireland A.D. 227 to A.D. 266. (The chapel of Cormac Mac Art at the Rock of Cashel is presently being restored.) Eanfhear was the son of King Conn of the Hundred Battles, Monarch of Ireland A.D. 166 to A.D. 195 (or, from another source, A.D. 123 to A.D. 157). The lineage of Conaire Mor appears to have died out. He had been “sixteenth in descent from Heremon” and his line included King Conaire the 2nd, Monarch of Ireland A.D. 157 – A.D. 166. (Shaw) The Meaghers/Mahers appear on the map within the barony of Ikerrin.

The common ancestor among the various pedigrees in Joseph Casimir O’Meagher’s compilation of pedigrees is Oilioll Oluim. Created by different scribes for important occasions, one pedigree was copied from the Psalter of Cashel. Saint Benignus (Beonna), the bishop of Armagh after Saint Patrick, was a descendent of Oilioll Oluim, as was Saint Cronan, Abbot of Roscrea. (O’Meagher, pp. 191-199)

Third century King Cormac Mac Art attempted to unite all of Ireland with Tara as its center, but there would be no overarching King of Ireland until Brian Boru overcame the O’Neills in 1005. Boru briefly united all the counties of Ireland by claiming the High Kingship until his death in 1014.

While it is impossible for anyone today to genealogically prove their lineage back to ancient Ireland, appreciating the long reach of some clans’ emotional ties to their homeland may help, by extension, to put in context the rebellious feelings that many had toward the waves of newcomers who displaced them, became their landlords, and/or forced their own ancestors to permanently flee to other countries or relocate to barren parts of the island.