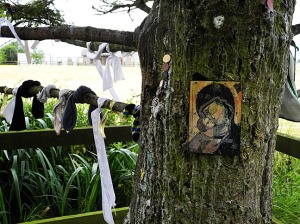 Saint Brigid, friend of Saint Patrick and founder of the convent Cill-Dara after which County Kildare was named, died in 525 A.D. Historically she has been a Christian deity to call upon at times of childbirth, for any kind of healing, for students, and for inspiration in all the arts, including poetry and metalworking. In Ireland and Scotland she is called “Mary of the Gaels.” Her feast day, Imbolc, is celebrated in her month, February (1st or 2nd), halfway between winter and spring (America’s “Ground Hog Day”). It is tradition to pick reeds with which to make a new Saint Brigid’s Cross to hang by one’s door as protection for the following year.

In her pre-Christian aspect, she was a “triple muse” archetype, a virgin/mother/crone Goddess, called Brigida/Brigid/Brigit/Bride. In Scotland, where she was also known as “Bride of the White Hills,” her symbol was a white swan.

Whether one ascribes to pagan and/or Christian lore about her, she is associated with sacred wells that link male (sun) and female (water) atmospheres above and below the earth. At her shrine outside Kildare City, near the Black Abbey, a modern statue depicts her as a young girl holding a flame in one hand, a staff in another, and wearing a crucifix around her neck. The well is in two sections, where it comes above ground at her form. This small section of land is kept pristine and is continually visited, with flowers and other mementos left behind as offerings to her spirit. A tree at the back of the shrine’s enclosure has also been made sacred in the ancient Gaelic tradition. Bits of cloth, string and other offerings have been attached to it.

In thanks for healing, in honor of my great grandmother Bridget Donovan Maher, and with other private wishes I attached fabric of my own knotted several times around one of the branches, a prayer with each knot.

Bogdanovich, Peter, Editor, A Year and A Day Engagement Calendar 1993, A Desk Diary Adapted from the works of Robert Graves and Other Historical Sources, Woodstock, NY: The Overlook Press, 1993.

5 thoughts on “Pilgrimage to the Midlands, Ireland.3 – Saint Brigid’s Well”