Last night I received some sad news. Howard Eckels, a man I had yet to meet, has passed on. An active email acquaintance with me, I had wondered why I had not heard back from him when I told him of my upcoming book signing in Naugatuck. Little did I know that he died one week after it, on June 28.

In August, 2011, Howie, as he called himself, contacted me out of the blue asking for my references regarding early burials in Saint Bernard Cemetery. I had written about this in a 2008 article published in the Connecticut Society of Genealogists journal and had many posted transcriptions on my 2006 web site, which has only recently come down. Eckels had been conducting what he termed a “forensic history examination” of Christ’s Church Cemetery. This first Catholic Church in New Haven was destroyed in a fire in June, 1848 in an episode that Reverend J.H. O’Donnell termed “a conflagration.” A second Catholic Church was created from the purchase and alteration of a former Congregationalist one, and it was consecrated as Saint Mary’s Church in December of that year. In 1851 the cornerstone was laid for the construction of the third Catholic church in New Haven, Saint Patrick’s, which was completed in 1867. On September 28, 1858 Saint John the Evangelist Parish was dedicated, having been built on the same spot as Christ’s Church. It was the first in America to have been designed after 11th and 12th century Irish churches.

In 1969 the site of the former Saint John’s Church was purchased by Yale New Haven Hospital, and since tombstones had been removed previously, by the late twentieth century no one knew that beneath the ground were bodies of early Catholic parishoners, buried between 1834 and 1853. (A few had still been buried there after Saint Bernard Cemetery was established in 1851, replacing Christ’s Church as New Haven’s Catholic cemetery.) In the long-standing tradition where cemeteries were on the grounds of churches, Eckels had discovered that there had been at least “602 burials, of which 40% were aged 5 or younger” around Christ Church. (In an interview he had also said 550 bodies.) When ground was broken in 2011 at Yale New Haven Hospital to expand its emergency room, skeletons were discovered and an important historic collaboration began.

Howie sent me his spread sheet of 608 burials, which cited the date of each death, the name of each person, their age at death and recorded cause of death, if possible, and he had planned to publish his findings in the New Haven Historical Society and Museum and the Godfrey Genealogical Library. Working with archeologists Nicholas Bellantoni, of the University of Connecticut and Gary Aronsen, of Yale University, who exhumed four skeletons, Eckels attempted to determine their identities. It was possible to take three dimensional scans using equipment at the new Quinnipiac University Medical School. “Two,” Eckels said, “were good enough for construction of [facial reconstruction] duplicates,” and genetic and DNA testing on the remains were also being done. Catholic Television and Radio did a taping for a documentary. I am including here two of three photos that he emailed me, which I have watermarked with his copyright. 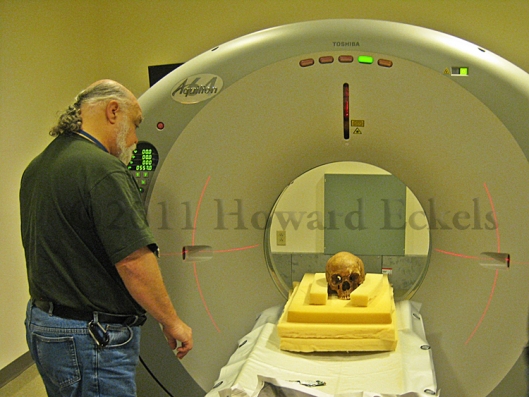 (Quoting from my own book) “Land was purchased on May 14, 1833, at the corner of York and Davenport streets upon which to build the wooden Gothic designed structure, Christ’s Church, for $3,000. It was considered ‘without exception the most beautiful little Gothic church in New England,’ but it was not without its difficulties. The first mass was held on May 8, 1834 in honor of the Catholic holy day, the Feast of the Ascension, with a large gathering of both Catholics and Protestants. Faulty craftsmanship in the construction of the gallery behind the altar resulted in its giving way, killing two people.” They were a Protestant man named Mr. Abraham Hardyear, of Orange, and his fourteen year old son, Abraham Lloyd Bryan. Mr. Eckels found that the two were included on his list of burials, where he placed the grandson’s age as between ten and fourteen. 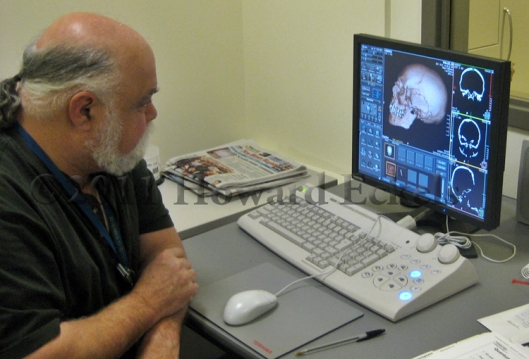 According to Eckels, this was his seventh history, “and by far the biggest and most rewarding. The investigative technique is from over 40 years law enforcement experience.” I had looked forward to getting to know him in the future, as I have been able to do with so many individuals with whom I have built an email relationship over the years around our mutual interests in the early Irish settlers, their history, and evidence of their existence in New Haven county, Connecticut. It is to my sorrow that I post this information about Mr. Howard Eckels here, where I first saw his kind face and smiling eyes in his Middletown Press obituary.

Only sixty-eight years old, Mr. Eckels had lived in New Haven and Hamden, Connecticut, served in the U.S. Army National Guard Military Police between 1963 and 1969, worked for Southern New England Telephone Company and was a Connecticut State Police Trooper for twenty-seven years. For ten years he was a U.S. Marshal and he also owned the Howard Pool Service and Enterweb Internet Services. His obituary also noted him as having contributed photographs to several local papers and that he was a member of the North Haven Historical Society. Some of his Irish family history that he shared with me included Dwyers and McGraths who were in Connecticut in 1800 working on the Farmington Canal project. He had traced his (Presbyterian) Eckels to Belfast before 1750 and thought that his family likely had a Norman background in Scotland and had been involved in the Battle of Hastings. He said, “My family may have been one of those visitors that came and never went home.”

I offer my sincere condolences to his family, and thank him, across the veil, for having reached out to me. I will look forward to seeing the results of his work that others, no doubt, will see through to fruition.

Molloy, Leo Thomas, compiler, Tercentenary Pictorial History of the Lower Naugatuck Valley, on the occasion of the 300th anniversary of the settlement of Connecticut, Containing a history of Derby, Ansonia, Shelton, Seymour, A Chronical of Progress and Achievement of the Several Cities and Towns, Ansonia, Connecticut: Press of the Emerson Bros., Inc., 1935.