I don’t know how the film “The Secret Life of Walter Mitty” would have affected me if I had not seen it upon my return flight from Ireland. It seemed, however, to be somehow perfectly symbolic in that context. I did not cry this time as the plane rose into the air toward home, but I did at the end of the film, and smiled broadly at many points along the way. Thank you for the movie, U.S. Airlines. With it you redeemed yourselves from my three-day ordeal that was the trip over, filled with delayed and cancelled flights, and an entire day and a half in the Charlotte, NC, airport, only completed by my arrival in Ireland with my bag still in New York. (But that’s another story.) 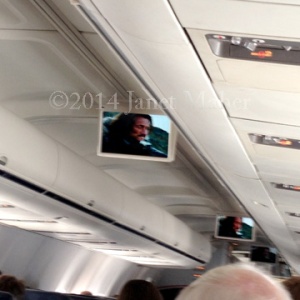 A pilgrimage is associated with a long journey that the dictionary clarifies as “especially one undertaken as a quest or for a votive purpose, as to pay homage” or one “made to some sacred place as an act of religious devotion.” For untold millions of people who have lineage in Ireland it is possible, even at the most basic tourist level, to make a pilgrimage there. Ireland, indeed, is a sacred place. Ireland is about majestic beauty and ancient history, but it is equally about the people themselves who welcome us back, understanding our craving to psychically anchor ourselves from within our ancestors’ homeland.

This pilgrimage, my third journey there, was the culmination of eight years of serious, passionate, intentional research as I sought to learn about Ireland’s history and my own family lines. Traveling alone, this time was an even stronger and more focussed act of devotion in honor of my ancestors. My O’Sullivan, O’Mahony, O’Donovan, and Halloran (Ó Súileabháin, Ó Mathghamhna, Ó Donndubháin, Ó hAllmhuráin) relatives had pointed me to the general areas of Counties Kerry, Cork and Limerick. My Murphys, Ryans and Walshes (Ó Murchadha, Ó Riain/Mulryan, Middle English walsche “foreigner,” also Welch) might have been from almost anywhere in the areas in which I have traveled, so many were the instances in which those surnames appeared. But history itself and enough other clues made it possible for me to get very close to the home bases of my Meagher/Maher, Butler and Phalen/Whalen (O’ Faoláin) ancestors. It was especially for them that I drove my (ridiculously expensive) rental car 1,756 kilometers “keeping between ditches all the way,” with two additional trips, including to Dublin, in my friend Jane Lyon’s car—those times with her behind the wheel.

Over these couple of weeks I visited again with friends I had met three years previously, and met “in real time” new friends with whom I look forward to remaining in contact. The power of the Internet to forge these connections and make these meetings possible has never ceased to amaze me. I have felt even more strongly, however, that my ancestors themselves have been gradually parting the Red Seas for me over all these many years. That Jane and I are now as if in parallel universes across the Atlantic Ocean, that we are joined at the hip in this quest to bridge my Connecticut research with her Irish research for particular families, and that we are in the present together (whether physically, virtually or on the telephone) is nothing short of a miracle!

Irish Hospitality ruled the days of my journey. I often felt as if I was moving through a fairy tale in the place where fairies originated. Locations I had researched and sought to find were revealed to me clue after clue, person by person, each in a different way, with one detail often literally pointing to the next. As happened upon many occasions in Connecticut, I would sometimes be emotionally overcome and moved to tears right on the spot due to some revelation. It may indeed be that with this trip my great great Maher grandfather has been found! More research will be necessary, but my new friend, Oliver, seems to have pulled aside a curtain that had been drawn for decades.

I will attempt in a series of posts to share the highlights of this trip. Come back again to read them. Also, please have a look at my book’s Facebook page, and consider purchasing my book, which is still available on Amazon.com or from me via Paypal or by check (P.O. Box 40211, Baltimore, MD, 21212).

Remember, not all who wander are lost. The roads do rise up to meet us, the wind will be at our backs, the rains will fall softly upon our gardens, and God does—and our Ancestors do—hold us in the hollows of their hands.

10 thoughts on “Pilgrimage to Ireland, Part 1”