As might be expected, I’ve taken a multitude of photographs. There are several collections going of certain topics. One is of the many instances of houses that look like the classic style we first draw as children, perfect geometry.

The artist’s book that I completed yesterday has a similar structure, though the relationship to these houses was quite accidental. From the side, if the front cover is opened the structure becomes houselike. The internal pages are designed to work as single squares made of two opposing triangles with a series of knots between them. I have called it Still Point, after Eliot. That will also be the title of the show I hope to have with work from this project, much of which needs to be completed after I get home. 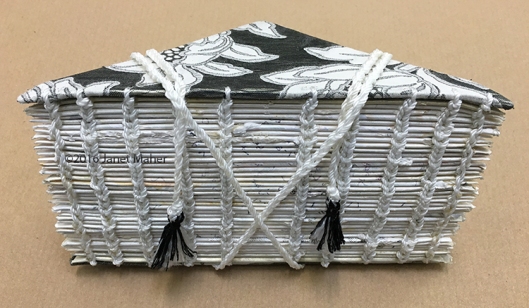