I apologize that technical difficulties have delayed the book, as I know that many of you are almost as anxious for it to arrive as I am, but a proof should be here within days and, given no problems, copies should be available within a week or so after that. Please save the date and plan to come, if you can, to the Naugatuck Historical Society on Thursday, June 21 at 6 pm. I will give a short talk about From the Old Sod to the Naugatuck Valley: Early Irish Catholics in New Haven County, Connecticut and will sign copies! Hoping to see you there!

I: Background Ireland; Arrival of the Normans; Conquest of Ireland; Rebellion; Thomas Francis Meagher; Some Potential Connections Between New Haven County and Ireland

Beginning from an interest in her own family’s history, with From the Old Sod to the Naugatuck Valley Janet Maher shares a deeply textured journey through a fascinating corner of the Irish Catholic diaspora. She explores the history of Ireland through the perspective of Catholicism, bridging it to the origins of Catholicism in Connecticut generally, then to several Irish families whose personal stories extend to the present.

Mapping and thoroughly transcribing the oldest Catholic cemetery in Naugatuck, Saint Francis, Maher has made connections between generations of families and friends. The book includes selected marriage, baptism and death records throughout the nineteenth century and excerpts from rare letters between Irish immigrants and individuals still in Ireland. It is replete with photographs from Ireland and Connecticut, and restored personal photographs selected from families’ collections, including her own, from materials safeguarded in scrapbooks and albums for years. In many ways Maher has made the people whose graves she encountered in cemeteries come alive again.

Creatively overcoming the limited existence of early genealogical records, From the Old Sod to the Naugatuck Valley draws a colorful, intimate multi-layered vision of a generation of immigrants and their descendants who shaped the character of southern Connecticut. Its fusion with family histories brings to the foreground a captivating thread in the tapestry called America.

Janet Maher has been a professional artist for more than thirty years. Her drawings, prints, artist books, mixed media works and collaborative projects have been exhibited widely and are in numerous private and public collections. A native of Connecticut, she also lived and worked in New Mexico before settling in Baltimore, where she is an Associate Professor of Visual Arts at Loyola University Maryland. This is her first scholarly book. 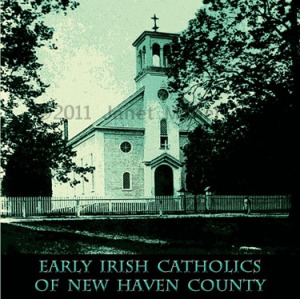 My Book - Coming in January!

Well, the semester has ended, and we did not quite get the book completed. I will be doing much over the break to get it ready and we will have it out by the end of January! A very merry holiday season to you all and many blessings in the new year!

A death record that I discovered for one James Maher in Connecticut near the town of my family, and age contemporary with my great great grandfather, listed his parents’ names and a place of birth, Kildare. This was quite unusual, as most of the earliest death records that I have looked for are missing, and those that can be found typically only say “Ireland” as a birth location. There were, of course, many James Mahers in Ireland as there are in America, but in honor of this one we intentionally visited Kildare.

We spent our first night in Ireland in Kildare City and had the first of extended conversations with people we met in the most authentic-looking local pubs. Two men in particular, part of a group of regulars who stop in for a pint after work (one whose family is Dunne) were extremely friendly and helpful. John thought I looked surprisingly like one of the Maher women whom he knew, which warmed my heart no end, though I had to wonder if there might not have been a touch of blarney in that.

Another advised me above all else during our stay, listen to people. And it is true that every conversation revealed ever more, often in small, tossed off comments that would anchor a thought or definitively answer a question of mine. At breakfast, when we asked the waitress for our first set of directions, she pointed to someone sitting at the counter, a retired schoolteacher, and said that he could tell us anything about the history of Ireland. While we were finishing our coffee he came over, sat down with us and we conversed (with me mostly enraptured and taking notes) for more than an hour. It was from him that I learned, among a great deal of other things, that I had the right to use the “Ní Mheachair” surname. (Typing it here for the first time was as emotionally significant as the first time I acknowledged aloud that I was an artist.)

We had not intended to try to find any “living Mahers” in Kildare, but an uncanny thing happened when we were slightly lost outside of town looking for Old Kilcullen Graveyard. I got out of the car to ask for directions in a neighborhood store and the proprietor said, “Here’s the person you need to talk to,” pointing to the customer standing next to me. As we turned to look at each other I was stunned to see my father’s eyes and face and became riveted by the stranger’s quiet voice and gentle demeanor, so like his (and my brother’s, who seems increasingly like our father). Maybe this was the person John thought I should meet!  So, in my memory we did meet – here was “a Maher,” I do believe – though it was early in our journey and I didn’t dare intrude on this man’s privacy nor ask anything beyond how to get where we meant to go. 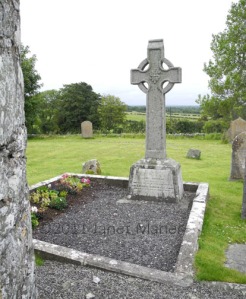 At the time of Saint Patrick the walled town of Kilcullen was ruled by the Kings of Leinster, whose primary location was one of the ancient hill forts, Dún Ailinne (Knockaulin) (2.,3.). Saint Patrick is credited with having begun a monastery in Cill Chuillinn where a round tower was built in the 11th century. At Kilcullen’s High Cross and Round Tower (Ardchros agus Cloigtheach Sheanchill Chuillinn), are remains of two high crosses, ruins of an old church and several graves (no Mahers). The base of one cross, carved on all sides in high relief designs, includes an image of Mac Táil, who was ordained by Saint Patrick. Mac Táil (of the adze) defended the monastery against the Vikings in the early 10th century.  A Bord Fáilte Éireann sign at the Round Tower explained that round towers “were used as refuges and as store houses for church valuables during the Norse raids in the 9th-10th century A.D. and served as watch towers and belfries. During the insurrection of 1798 during a successful Irish stand, the upper portion of the tower suffered some damage.”

One of the oldest graves in Saint Francis Cemetery, Naugatuck, Connecticut, is that of Nicholas Brennan, from Kilkenny.  At present it hasn’t been determined whether his family was related to the group that arrived from Kildare in 1860, whose intermarried branches through the decades seem to connect with just about every other Irish Catholic family in town–including mine. I believe it is possible that the tombstones I have transcribed from Kildare could tie into the Naugatuck Brennans. In a different part of Saint Francis Cemetery, a Talbot grave also cites Kildare as the origin of that family.

4. (Lichen, very difficult to read)  This stone was erected by Daniel Brennan in memory of his Father, Patrick Brennan, who departed this life August [?] [1861?] aged [?] and his Mother [Mary] Brennan (too much lichen to read the rest).